Is marriage necessary? Do we need to be married? Why isn’t it okay to just be in a relationship, have children, and live under one household?

A lot of us seem to have a very earthly view of what marriage is. Marriage is a beautiful union under the correct circumstances. Marriage is not a day where you get dressed up, take a load of photographs, recite some sentences, and dance the night away. Marriage is not simply a ticket or a rite of passage in order to create children with freedom of guilt. Marriage is not a “get out of jail free card” for someone who has lived a wild life. Marriage is not necessary simply because legal paperwork would allow for a better amount of deductions when you file your taxes. Marriage isn’t about all of that. The purpose -and may I add SOLE PURPOSE-  of marriage is to bring glory to God. It is a covenant between a man and a woman with God as the head. Everything we do in life serves the purpose of bringing God glory as His children.

Now, before we get started, let me clear up a few things. I’m not saying that everyone has to get married, or that everyone is going to get married in their lifetime. Marriage may not happen for everyone, and that’s not anything that is really within our control, unless you purposefully sabotage your chances of meeting people. However, for those that do have plans of procreating, marriage should be your first priority.

A Christian marriage is the foundation of life. It’s part of God’s divine order. Marriages existed in the bible although they may not have been as extravagant as we see them today. God created a hierarchy for the household in order to provide guidance, but when this hierarchy is put into a different order, it gives way to a slew of issues within the family, which then translates into our society. For example, teen pregnancy was on the rise when I was in high school. I don’t believe it’s so much of a high statistic now, but very few or almost no couples stay together after having a child together. These children stay with their mothers most times, and grow up without their fathers in their lives. Now, according to the hierarchy, the man comes underneath God, the wife is beneath the husband, and the children are beneath all the others. Some may view this as a way to belittle the wife or make her look inferior to her husband, but that is not the way it should be viewed. Because of this, many have issues with the term “submission”, but we will tackle that in another post. We should view this umbrella system as a source of protection. You view your husband as the provider and protector, and God is also viewed in that light. If God is protecting and providing for the husband-and essentially the entire family, the husband is then given the opportunity to provide, protect, and shelter the wife, which also transcends to the children. The diagram I was referring to is down below: 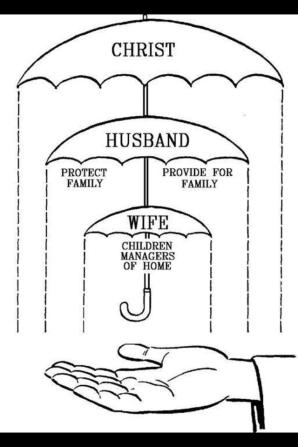 We all strive to be like Christ, but Jesus Christ didn’t get married, so why should we? When Jesus Christ was born by Mary, He grew to live an exceptional life that was devoted to God and without sin. We can’t come to the generalization that we shouldn’t get married simply because Jesus didn’t get married. Marriage was not part of Jesus’ assignment here on earth; and like others, marriage may also not be their assignment as well, but that doesn’t give them the green light to fornicate and do all sorts of things that are deemed as sexual sins. However, let us not forget that it was God who created marriage, and so it is imperative that we do marriage His way. Marriage was created in order to emulate the relationship between Christ and His church. When a couple becomes married, they become one flesh-one entity. God made sure of this in Genesis as he took Adam’s rib in order to create Eve. By this action, Adam and Eve were bound and the institution of marriage was ordained by God when Adam accepted Eve as his mate. Marriage is explained further in the following verse:

“21 So the Lord God caused the man to fall into a deep sleep; and while he was sleeping, he took one of the man’s ribs[g]and then closed up the place with flesh. 22 Then the Lord God made a woman from the rib[h] he had taken out of the man, and he brought her to the man. 23 The man said, “This is now bone of my bones and flesh of my flesh; she shall be called ‘woman,’ for she was taken out of man.” 24 That is why a man leaves his father and mother and is united to his wife, and they become one flesh.” Genesis 2:21-24 NLT

The instructions for CHRISTIAN HOUSEHOLDS are found here: Ephesians 5:21-33. The bible refers to the household under “husbands” and “wives”, implying marriage of course.

The enemy is crafty and knows that the parents’ actions trickle down and affect their offspring even generations down the line. For that very reason, he convinced Eve and then Adam to take a bite of the apple, and to this day, we are experiencing the consequences of their actions.

Let us take note that God did not allow Mary to conceive Jesus simply because she was fit to be a mother and had boyfriend or fiancé. God saw them fit because they were married before Jesus was born. That has to be significant. God could have chosen any virgin in general that was not married, but He did not do that. God sees the importance of the family unit and the role marriage plays within it.

The following facts are sourced from fathers.com

God knew how important the family unit was in order for successful procreation and further development for his kingdom, and I believe that is why he mandates marriage for procreation. I say this because he identifies fornication as a sin. Children can be produced as a result of fornication, but because sex is accepted for those that are married, He deem it the perfect criteria for procreation. That also doesn’t mean that one should simply get married to anyone just for the reason of procreating. According to the statistics above, it is never God’s intention for His children to live in poverty, to commit suicide, be unsuccessful, and etc., and so He set the proper foundation in order to limit those outcomes.

“11 For I know the plans I have for you,” declares the Lord, “plans to prosper you and not to harm you, plans to give you hope and a future.” Jeremiah 29:11 NLT

The devil hates anything that brings God glory and it’s his sole purpose to deteriorate that particular thing. Maybe you’ve noticed that a couple could have been together for 6 years and even more, but the moment they get married, they divorce. They don’t realize that because they are doing something that glorifies God, the enemy will find any possible way to break it up, and so it’s very important that you keep your guard up when you’re married and remain aware about the fact that the enemy doesn’t want you to succeed. He knows that if the foundation of the family is rooted in what God intended for it to be, then his plans of winning souls for damnation will not come to pass.

Now from a realistic standpoint, children are produced quite often in households that do not have a solid foundation of both parents. God still loves you and has a plan for you. Children are a blessing no matter what form they come in, but let’s make sure that we train them and allow them to live in the blessings that have been claimed for their lives through Christ Jesus.

With all that’s been said, I am in no way saying that everyone is required to get married. I’m simply saying that we should not be accustomed to the new norm of building a family outside of the institution of marriage. Let’s do things the “God-way”, after all, He created the world and knows what is best for His children, whether or not we agree with it.

Want to join the discussion?
Feel free to contribute!